How Does a Self-Directed IRA Work and Who Qualifies?

Who Qualifies for a Self-Directed IRA? 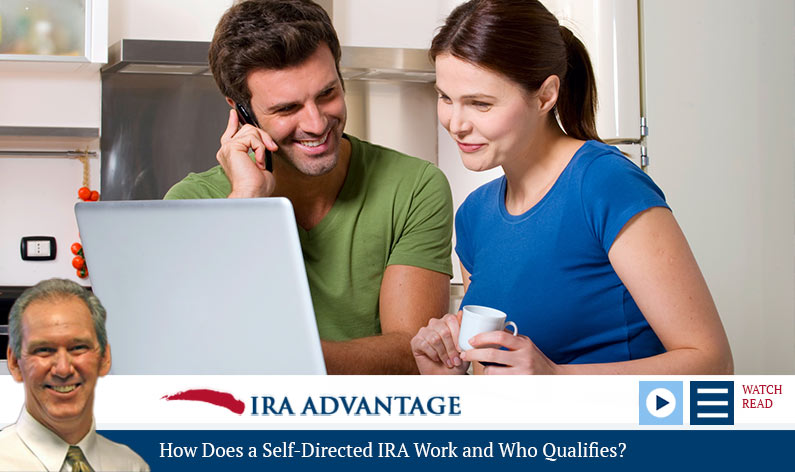 How Does a Self-Directed IRA Work?

This depends on what kind of self-directed IRA we’re talking about. The most basic form of a self-directed IRA is really a transaction. We’re just going to move funds from a custodian who won’t allow you to do what you want to one that does. This is not a question of legality with respect to limitation on investments, but really just a limitation based on the custodian and what they want to allow you to do.

A lot of custodians actually offer investments, and they want you to order off their menu of investment options. A truly self-directed custodian doesn’t sell any investments. They’re acting as a custodian and they’re typically going to allow you to buy or make any investment the law allows. With an IRA you can buy literally anything other than collectibles, life insurance contracts, or stock in a sub S Corp.

If it’s a checkbook IRA, that changes things dramatically. A checkbook IRA, in effect, pushes the custodian to the side, which is very good if you’re talking about time-sensitive investments. I’m talking about investments that are going to need good funds, things that might be more management intensive. Those things are typically going to require a checkbook IRA. The downside of a checkbook IRA is that there is no safety net. This means you need to make sure that anytime you do a transaction, you are diligent about keeping yourself on the straight and narrow.
To review, a basic self-directed IRA requires the custodian’s approval on every investment that’s made and every sale. A checkbook IRA moves the custodian aside, giving the investor the power of the pen and enabling the investor to make an investment by writing a check.

Can You Buy Real Estate with a Self-Directed IRA?

In 1991 my brother and I started a company called Equity Advantage to handle tax-deferred exchanges. In the years that followed we had many clients who wanted to use their retirement funds to buy real estate. We would give some direction, and then follow up and ask people how they did with those investments. But it seemed that most hadn’t ever made those investments. It turned out that people were often told they couldn’t do it for this or that reason.
In short, they were given incorrect information. Rules haven’t changed. If you look at rules for IRAs and 401(k)s since the mid 1970s, everything’s sort of considered to move along in the same way. The laws have not changed with respect to what you can and can’t do. IRAs, as I said, have very few limitations on what can be purchased. The way the law works is that if it’s not specifically prohibited, then it’s allowed. 401(k) plans or even more liberal with what you can buy. The only limitation there is collectibles.

When we put a 401(k) plan together for somebody, typically those are self-trustee plans and people have the power of the pen. When we’re talking about buying real estate, it’s not a question of whether you can buy it, it’s a question how you want to buy it. You can use a basic self-directed IRA to make that investment, and that is fine for a passive investment (for example, a piece of land). This works if you’ve got a check or two a year to take care of insurance and property taxes. But beyond that, it’s a passive investment.

But a basic account is not going to work well for somebody who wants a rental house, for example. If it’s a single-family rental, a checkbook IRA is going to allow you to make an investment using a limited liability company structure between the custodian and the investment, so we put an IRA-specific LLC in place. This makes our client the manager of the LLC. The member of that LLC is the trust company for benefit of that investor’s retirement account. And that entity, that limited liability company, could contain the individual, a single IRA account. It could contain an IRA, a traditional and a Roth. It could contain both a husband and wife. It could contain personal money and plan money. All those things are possible.

When we structure a limited liability company, the company can contain a single member, or it can contain multiple members, even multiple members that are disqualified parties to one another. If we have disqualified members in there, then there will be restrictions on additional funds coming in. But literally you’d sort of look at a given investment, figure out the source of money that’s going to be required to make that investment, and then we can package that to create the proper investment vehicle for a taxpayer.

IRAs are a popular method of investment for retirement. But, as David notes, you need to focus on your investment goals and decide just what you want. His best advice is “pick up the phone and give us a call:” 503-619-0223.