Is a Self-Directed IRA a Good Idea? What is UBTI?

David Moore with IRA Advantage looks at the value of self-directed IRAs and the options available with them. He discusses the option of taking a required minimum distribution as an in-kind distribution and the planning involved in that decision. Learn about unrelated business taxable income (UBTI) and when that may become an issue with your investments. Get the information you need to create the future you want by understanding your investment options.

Is a self-directed IRA a good idea?

The only way to get that real estate if you want direct ownership is your financial advisor might talk to you about REITs. Well, that’s a stock. It won’t give you the actual benefits of true real estate ownership. You would be buying a stock that contains that, but as far as if you want to go out and buy a house or buy a business property, that is something else where you’re actually getting the attributes of real property. A self-directed IRA is the only way you’re going to do that. If you want to buy gold and silver and actually have physical custody of it, that’s the only way you will get it done. If you want to diversify and do anything outside of Wall Street’s offerings, a truly self-directed IRA is the only way you can go.

Whether that is a good idea for you is for you to decide, but I don’t know why it wouldn’t be. As far as objections that people may have to taking your retirement account to go buy real estate or other self-directed investments, often when people come to us talking about real estate, somebody will have told them, “No, you shouldn’t buy real estate because if you buy real estate with an IRA, 401(k) plan you’re going to lose the long term capital gains tax consequence. You’re going to lose interest deductions or depreciation. It’s not a liquid asset, so at the end of the day if you’ve got to take an RMD, that required minimum distribution at 70.5 years of age, what happens if you need to take that RMD and you don’t have the cash to do it?”

This becomes a question of who’s asking the question and what the point of it is because if you’re talking about the loss of long-term capital gains tax, interest deductions, depreciation, and all those things, give me an example of an IRA- or a 401(k)-owned asset that gives you those things. Those are moot points in my mind. It doesn’t really matter whether it’s in real estate or anything else.

As far as the liquidity and RMDs are concerned, that’s one of those things where it’s looked at as a problem, but it’s a true opportunity because if we’re talking about an in-service distribution, then people are typically contemplating cash. When you get those RMDs, once again, they’re typically contemplating a cash distribution. That’s the way the retirement world looks at these distributions, but there’s nothing in the law stating it has to be cash. You can always take an in-kind distribution. Taking in-kind distributions actually has some opportunities. As far as the value of it, what is something truly worth? An appraiser of a piece of property is going to have a hard time giving you a value if they’re just putting a value on an asset. If you’ve got a sale pending, then you’ve got a buyer and a seller that are agreeing to a price. But when you’re looking at purely just sticking a value on something, there’s obviously some room there back and forth.

The second piece of it is if you’re taking a piece of something, a minority interest in an asset as a distribution, it’s possible to discount that valuation by up to 40 percent. So, by getting away from cash distributions, you have tremendous opportunities when you look at in-kind distributions. Usually when we’re looking at Wall Street offerings, we’re not going to have that opportunity. Self-directed accounts offer different opportunities. We have a lot of people that wonder whether you can buy a retirement home with your retirement account. The answer is yes, you can, but you cannot use it before it’s taken as a distribution.

But look at this opportunity. You buy that property, and you can’t use it until it’s taken fully as a distribution. But let’s say you buy that property in a limited liability company, and every year for a few years you just transfer, do an assignment of membership interest, a minority interest in that limited liability company. You don’t even have to have a deed drawn. You’re just shifting the membership interest in the limited liability company to accommodate the distributions that you either want to take or you have to take in the RMD situation, and by taking that minority interest, you can actually discount the valuation of that distribution dramatically. This is something that’s done in the estate planning world with gifting all the time, yet I don’t see it done in the qualified world much. But it’s something that we work with regularly. You take a piece of it over a series of years.

What’s the downside of taking an in-kind distribution? If you take a cash distribution, you’ve got the cash to pay the tax obligation. If you’re taking an in-kind distribution, you’re taking asset out and you’re not really receiving anything to pay that tax obligation. A great solution to that is just take a couple minority interest distributions after you’ve taken those before you actually realize that tax obligation, do a cash out refinance of the property, and boom. There you go. You didn’t have to come out of pocket any money at all, and now the asset is yours. You want to move into it. You want to do whatever you want to do. It’s yours. So, this is something that’s, once again, looked at as a problem oftentimes by financial people, whether tax people or to Wall Street people, and I look at it as a tremendous opportunity. 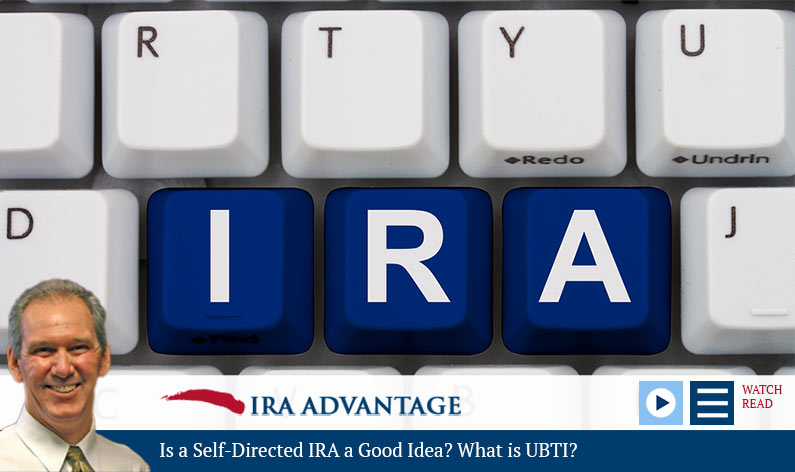 UBTI stands for unrelated business taxable income. How would we be exposed to that? Well, consider any IRA-owned asset (either Roth or traditional IRA): If you go out and buy a property and it’s 50 percent loan to value, any income or gain attributable to other people’s money (whether it’s a bank loan or a seller carry back), any type of situation where you’re gaining benefit and making money off other people’s money, the government doesn’t want to see that without some tax exposure. So even with a Roth-owned property, if it’s 50 percent loan to value, you’re going to pay tax on half the income in a given year. Not you, but your account has tax exposure on that. Then half the gain on disposition.

Twenty years ago or so, when we were strictly doing 1031 exchanges, there was a person in the IRA world who was trying to sell self-directed IRAs in opposition to 1031. Well, they’re apples and oranges, two totally different things. I guess the one thing I’d say is there are situations where an IRA would need to do an exchange. Even a Roth IRA might have to do an exchange if there’s leverage on it to defer that tax exposure.

Let’s look at the 1031 context, and someone who wants to flip properties. They often try to argue that they’re holding it for investment, but they’re not. Flipping properties is property held for resale. It’s a dealer property. There’s a court case that gives nine points that are used to determine dealer status. We’ve used that for 30 years in the exchange business, and I look at that same thing and apply it to my IRA, 401(k) clients. You start looking at what this thing is. If you’re flipping property, then that starts to look like a business, and any time you’ve got that situation, you’re subject to the UBIT.

Don’t look at this as a reason to do or not to do something. Just understand there’s potentially going to be some tax exposure. Have your tax people work on those numbers, and go into it knowing what those would be. Once again, don’t make a decision based on this, but do consider it as a factor before making that investment.

You really can’t afford to deal with less than IRA experts when planning for your retirement: it’s just too important, and the laws covering IRAs can be complex. Put David and the entire team of professionals at IRA Advantage on your side today. Call to get started: 503-619-0223.