Do I Need A Custodian for A Self-Directed IRA?

A custodian is needed for any IRA. The custodian for a self-directed IRA is going to be different than your normal custodian. You cannot go to one of the big stores like the Edward Jones or Charles Schwab and have a truly self-directed IRA. They have accounts that they call self-directed, but really, you’re allowed to buy from a set menu of investments that they have put together for you.

A self-directed custodian will allow you to buy into any asset that’s allowed in an IRA. A self-directed IRA is not a legally defined term. It’s just a term that describes an account that allows you to do what you want to do. If we look at this in terms of the custodial deal, any IRA requires a custodian, so in the most basic sense for a truly self-directed IRA, we’re just going to be moving that IRA account from a custodian that won’t allow you to do what you want to one that does. 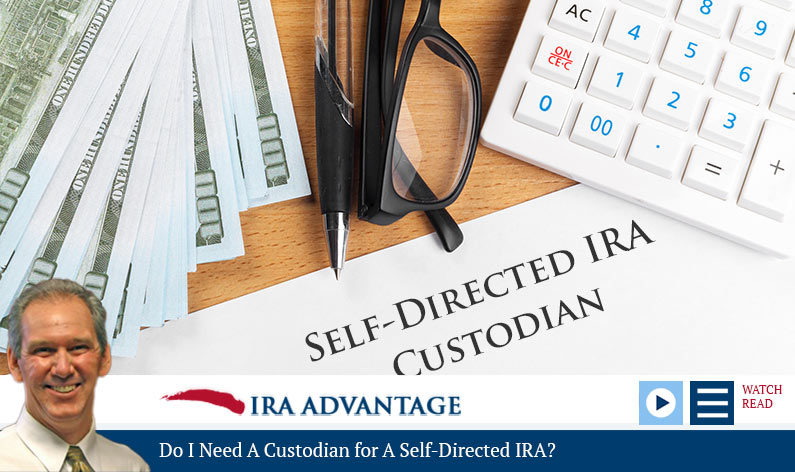 Why Does the Definition of a Self-Directed IRA Differ from Company to Company?

People often come to us and say, “I’ve got a self-directed IRA at such-and-such company,” and we know right off that we’ll find out who the custodian is and that it’s not truly self-directed, because they will not allow you to buy real estate, or notes, or anything like that. It really is an account that they term self-directed, but, in fact, they have a very limited inventory of stocks and bonds and mutual funds that they’ll allow you to buy into. It’s just you are the one who can make that call. The restrictions are not typically by law; it’s just by the policies of that particular company.

If we’re talking about a 401K plan, those restrictions, once again, are not by law or by law per what you can and can’t buy with a 401K. It’s what that plan document actually allows you to do. With a 401K plan, we can change that plan or amend the plan or replace the plan, depending on what’s happening and if somebody wants to do that.

The other issue with these accounts when you’ve got your IRA at a self-directed custodian versus a “traditional custodian,” it’s an IRA account, whether it’s here or there, and you still have the same contribution limits for your traditional accounts, SEP accounts, simple accounts, and Roth accounts. They’re all available at the self-directed custodian, and they all have the same contribution limitations. You’re dealing with required minimum distributions, the same way you normally would. You just have the ability now to invest in what you know.

In short, there’s just a lot of misunderstanding and even misinformation about self-directed IRAs, but the laws have never really changed with what you can and can’t do. Since the mid 1970s, you’ve always been able to self-direct and buy real estate or notes or whatever it might be. It’s always been that way; it’s just a well-kept secret. The law has always allowed it. It’s just whether or not your custodian or plan provider allows it.

Many can call themselves IRA experts. Be sure you’re dealing with true professionals when it comes to your retirement planning. Give the IRA experts at IRA Advantage a call today! 503-619-0223